The Reason Interview With Nick Gillespie « »
Should We Forgive Student Debt? 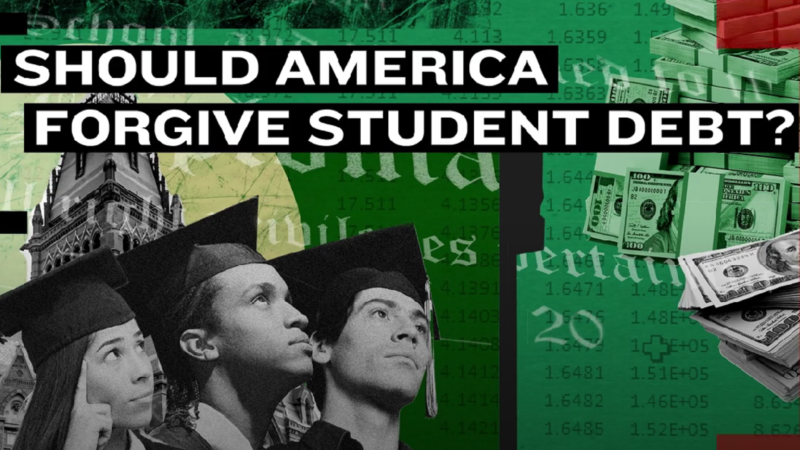 I'm excited to share a special bonus episode of The Reason Interview with Nick Gillespie. It's a debate about forgiving student loan, debt organized and produced by the good folks at Intelligence Squared US, America's leading platform for fair, balanced, informed debate on all the leading issues of the day. I've been involved with them for years, including participating in debates on drug legalization, Medicare for All, Net Neutrality, and today's show about student loans (which originally took place in March 2021).

In the interests of transparency, you should know that this is a paid promotion. But I'm happy to share this Intelligence Squared US debate not just because I'm one of the debaters, but because it's modeling exactly what we need more of: deeply informed and civil arguments over what sorts of policies we need to help make our country the best it can be.

They're doing great stuff over at Intelligence Squared by bringing reason and passion to controversial topics and presenting all sides fairly and creatively. The debates are done "Oxford style," which means the winner is the team that persuades more people to its side. That adds drama and excitement to each debate.

The moderator is John Donvan, a legendary, award-winning journalist who doesn't let anyone get away with cheap shots or slippery language. I always learn a ton, whether I'm just listening to or participating in one of the debates. It's a terrific series that reaches back years and covers just about every topic you can imagine and you can access it all by subscribing to their podcast feed or by going over to their website, where they also have video and a ton of links and supporting materials so you can do your own research and come to your own conclusions.

And now, without further ado, here's a great debate from Intelligence Squared, Should We Forgive Student Debt? If you want to check out the video version, transcript, and background about all the participants, go here.

The post Should We Forgive Student Debt? appeared first on Reason.com.

1d ago1d ago
Subscribe
Unsubscribe
Heti
Every Monday, the libertarian editors of the magazine of “Free Minds and Free Markets”—Matt Welch, Nick Gillespie, Katherine Mangu-Ward, and Peter Suderman—discuss and debate the week’s biggest stories and what fresh hell awaits us all.
T
The Run-Up

4d ago4d ago
Subscribe
Unsubscribe
Heti
Elections are about more than who wins and who loses. The New York Times reporter Astead Herndon takes us beyond the horse race to explore how we got to this fraught moment in American politics.
T
The More Perfect Union

1h ago1h ago
Subscribe
Unsubscribe
Heti
Sebastian Payne takes you into the corridors of power to unwrap, analyse and debate British politics with a regular lineup of expert Financial Times correspondents and informed commentators. New episodes available every Saturday morning. Hosted on Acast. See acast.com/privacy for more information.
F
Face the Nation on the Radio

31m ago31m ago
Subscribe
Unsubscribe
Heti
Organizer and activist DeRay Mckesson explores news, culture, social justice, and politics with analysis from Kaya Henderson, De’Ara Balenger, and others. Then he sits down for deep conversations with experts, influencers, and diverse local and national leaders. New episodes every Tuesday.
T
The Wilderness

42m ago42m ago
Subscribe
Unsubscribe
Havi
In season 3 of The Wilderness, Jon Favreau talks to voters in the midterm battleground states who will determine the future of democracy. With the help of grassroots organizers, strategists and his own experience as a campaign veteran and speechwriter for Barack Obama, Favreau will unpack what it will take for Democrats to reach these voters and hold together a pro-democracy coalition in 2022 and beyond.
C
Chapo Trap House