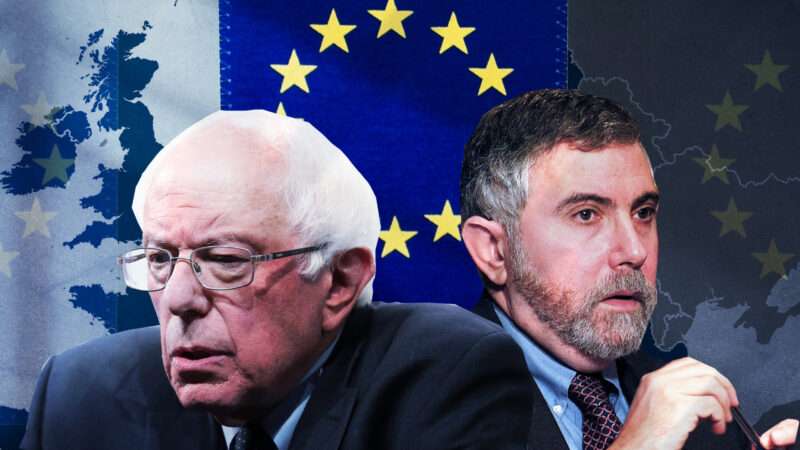 "About three times as many Europeans leave their homelands and immigrate to the United States every year as the other way around," reports David Harsanyi. Yet "a growing number of American elites—politicians, academics, pundits, journalists, among others—argue, with increasing popularity, that we should look across the Atlantic for solutions to our most pressing problems." Figures such as Sen. Bernie Sanders (I–Vt.) and Nobel laureate and New York Times columnist Paul Krugman want us to follow Europe's lead when it comes to healthcare, government spending, tax policy, business regulations, and restrictions on free speech.

In Eurotrash: Why America Must Reject the Failed Ideas of a Dying Continent, Harsanyi, a syndicated columnist and senior writer at National Review, documents how the United States is doing far better across a wide array of economic, cultural, and political indicators than Europe. It's a powerful argument that is as nuanced as it is polemical. For instance, he notes that Scandinavian countries are hardly as socialist as their American champions and critics both claim. He also notes that many nationalist conservatives seem hellbent on importing a loathsome blood-and-soil populism from Hungary and other European countries.

I talk with Harsanyi about all that and how his career—which includes stints at The Denver Post, Glenn Beck's The Blaze, and The Federalist—reflect massive changes in the media landscape and what it means to be on the political right (he considers himself a conservative with some libertarian leanings). Born in 1970 and raised in Queens and Long Island by Hungarian refugees from communism, he remains deeply critical of many of former President Donald Trump's protectionist policies while also freaked out by President Joe Biden's massive government spending.

5d ago5d ago
Subscribe
Unsubscribe
Heti
Every Monday, the libertarian editors of the magazine of “Free Minds and Free Markets”—Matt Welch, Nick Gillespie, Katherine Mangu-Ward, and Peter Suderman—discuss and debate the week’s biggest stories and what fresh hell awaits us all.
T
The Run-Up

2d ago2d ago
Subscribe
Unsubscribe
Heti
Elections are about more than who wins and who loses. The New York Times reporter Astead Herndon takes us beyond the horse race to explore how we got to this fraught moment in American politics.
T
The More Perfect Union

17h ago17h ago
Subscribe
Unsubscribe
Heti
Sebastian Payne takes you into the corridors of power to unwrap, analyse and debate British politics with a regular lineup of expert Financial Times correspondents and informed commentators. New episodes available every Saturday morning. Hosted on Acast. See acast.com/privacy for more information.
F
Face the Nation on the Radio

12h ago12h ago
Subscribe
Unsubscribe
Heti
Margaret Brennan asks the biggest guests the smartest questions. Hear official Washington on the firing line, on your schedule.
P
Pod Save the People

4d ago4d ago
Subscribe
Unsubscribe
Heti
Organizer and activist DeRay Mckesson explores news, culture, social justice, and politics with analysis from Kaya Henderson, De’Ara Balenger, and others. Then he sits down for deep conversations with experts, influencers, and diverse local and national leaders. New episodes every Tuesday.
T
The Skepticrat

1d ago1d ago
Subscribe
Unsubscribe
Heti+
A bootstrappers podcast for founders, entrepreneurs, visionaries and dreamers who are building businesses from the ground up without the taking on debt or selling equity. Here we cover marketing, sales, organization and mindset issues that matter to you
Hallgasson 500+ témát