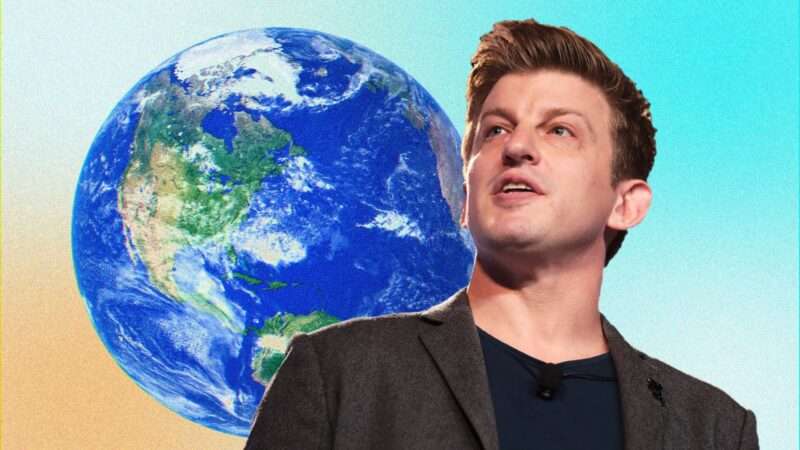 Two basic beliefs frequently circulate today: First, that fossil fuels are causing imminent global catastrophe and, second, that renewable energy sources (especially solar and wind) can supply all our energy needs either right now or in the very near future.

Epstein says that both of those points are wrong. He believes that fossil fuels have contributed to a warming global climate system but argues that they give us more and more mastery over the environment and their renewable replacements can't scale up to fulfill our needs. Humans, he says, are flourishing like never before precisely because oil, gas, and coal allow us to withstand a world that is very inhospitable to our living here. Wind and solar make up just 3 percent of all energy right now and forcing a fast-paced shift to renewables, he argues, would consign billions of people to poverty or death in order to stave off the impact of man-made climate change, the consequences of which have often been exaggerated and with which humans are equipped to deal.

In this wide-ranging conversation, Epstein discusses how he came to his views, how he fought an attempted hit piece in The Washington Post by using social media, why Environmental, Social, and Governance (ESG) corporate rules are troubling, and how Ayn Rand influences his thinking.

6h ago6h ago
Subscribe
Unsubscribe
Heti
Every Monday, the libertarian editors of the magazine of “Free Minds and Free Markets”—Matt Welch, Nick Gillespie, Katherine Mangu-Ward, and Peter Suderman—discuss and debate the week’s biggest stories and what fresh hell awaits us all.
T
The More Perfect Union

15d ago2w ago
Subscribe
Unsubscribe
Heti
Elections are about more than who wins and who loses. The New York Times reporter Astead Herndon takes us beyond the horse race to explore how we got to this fraught moment in American politics.
T
Truth vs Hype

6d ago6d ago
Subscribe
Unsubscribe
Havi
Truth vs Hype travels to the Ground Zero of the biggest story. Every week, re-defining reportage on Indian television.
T
The Skepticrat

4d ago4d ago
Subscribe
Unsubscribe
Heti
Organizer and activist DeRay Mckesson explores news, culture, social justice, and politics with analysis from Kaya Henderson, De’Ara Balenger, and others. Then he sits down for deep conversations with experts, influencers, and diverse local and national leaders. New episodes every Tuesday.
P
Payne's Politics

2d ago2d ago
Subscribe
Unsubscribe
Heti+
A bootstrappers podcast for founders, entrepreneurs, visionaries and dreamers who are building businesses from the ground up without the taking on debt or selling equity. Here we cover marketing, sales, organization and mindset issues that matter to you
O
OPB Politics Now

10m ago10m ago
Subscribe
Unsubscribe
Heti+
OPB Politics Now is a weekly podcast that takes a deep dive into the hottest political topics in Oregon and the Northwest. Every Friday, OPB’s political reporters and special guests offer in-depth analysis, discussion and insight into candidates, events and issues.
T
The Seen and the Unseen - hosted by Amit Varma

4d ago4d ago
Subscribe
Unsubscribe
Heti
The Seen and the Unseen, hosted by Amit Varma, features longform conversations that aim to give deep insights into the subjects being discussed. Timeless and bingeworthy.
Hallgasson 500+ témát