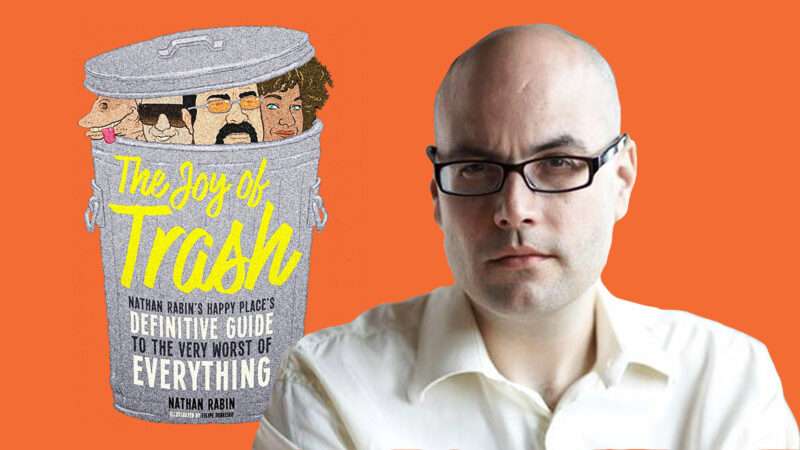 "I am a professional rememberer," writes Nathan Rabin in The Joy of Trash. "It is my duty to remember not just for my own but for society."

Rabin is really taking one for the team here, especially since his new book accurately bills itself as the "definitive guide to the very worst of everything." Among the godawful things he explicates are Academy Award-winning actress Joan Crawford's bizzare and patently false 1971 lifestyle guide, My Way of Life; the misbegotten Brady Bunch Variety Hour, which improbably included numerous "water ballet" routines along with endless dad jokes; cocaine-addicted movie producer Robert Evans' 1981 court-ordered, star-studded, anti-drug TV special Get High on Yourself; and the entirety of billionaire Mike Bloomberg's 2020 presidential candidacy.

Rabin was the headwriter for The A.V. Club for two decades and the inventor of the popular-but-controversial term "Manic Pixie Dreamgirl" to describe a recurring film character who "exists solely in the fevered imaginations of sensitive writer-directors to teach broodingly soulful young men to embrace life and its infinite mysteries and adventures." He now runs his own website, Nathan Rabin's Happy Place, where he sifts through all manner of cultural detritus with endless wit and energy. He also co-hosts Travolta/Cage, a podcast about "the greatest actors in history."

The 45-year-old Rabin talks with Nick Gillespie about how his Gen X roots inform his appreciation for and critique of consumer culture. Kids his age, he explains, learned early on through D.A.R.E. and transparently phony TV shows that adults and other authorities were often lying. Gen X came of age in the 1990s, he says, a time when the belief that technology would make everything perfect was widespread, an optimism severely tested both by the bursting of the tech bubble and the 9/11 attacks. "Irony and satire and comedy," he says, "can bring light to a very dark situation, and it can be very cathartic being able to laugh at things that you're not supposed to laugh about or being able to laugh about things that are incredibly dark."

Rabin also discusses how musician Grimes, who had a widely covered relationship and two children with billionaire Elon Musk, is reclaiming—or perhaps satirizing—the manic pixie dream girl trope and why Weird Al Yankovic, the subject of a good deal of his writing, has had a career far longer than most of the people he parodies.

Watch the video version of this interview here.

1d ago1d ago
Subscribe
Unsubscribe
Heti
Every Monday, the libertarian editors of the magazine of “Free Minds and Free Markets”—Matt Welch, Nick Gillespie, Katherine Mangu-Ward, and Peter Suderman—discuss and debate the week’s biggest stories and what fresh hell awaits us all.
T
The More Perfect Union

16d ago2w ago
Subscribe
Unsubscribe
Heti
Elections are about more than who wins and who loses. The New York Times reporter Astead Herndon takes us beyond the horse race to explore how we got to this fraught moment in American politics.
T
Truth vs Hype

7d ago0w ago
Subscribe
Unsubscribe
Havi
Truth vs Hype travels to the Ground Zero of the biggest story. Every week, re-defining reportage on Indian television.
T
The Skepticrat

5d ago5d ago
Subscribe
Unsubscribe
Heti
Organizer and activist DeRay Mckesson explores news, culture, social justice, and politics with analysis from Kaya Henderson, De’Ara Balenger, and others. Then he sits down for deep conversations with experts, influencers, and diverse local and national leaders. New episodes every Tuesday.
P
Payne's Politics

3d ago3d ago
Subscribe
Unsubscribe
Heti+
A bootstrappers podcast for founders, entrepreneurs, visionaries and dreamers who are building businesses from the ground up without the taking on debt or selling equity. Here we cover marketing, sales, organization and mindset issues that matter to you
O
OPB Politics Now

23h ago23h ago
Subscribe
Unsubscribe
Heti+
OPB Politics Now is a weekly podcast that takes a deep dive into the hottest political topics in Oregon and the Northwest. Every Friday, OPB’s political reporters and special guests offer in-depth analysis, discussion and insight into candidates, events and issues.
T
The Seen and the Unseen - hosted by Amit Varma

6d ago6d ago
Subscribe
Unsubscribe
Heti
The Seen and the Unseen, hosted by Amit Varma, features longform conversations that aim to give deep insights into the subjects being discussed. Timeless and bingeworthy.
Hallgasson 500+ témát